I use Feedly as my news aggregator, and I subscribe to my own blog on Feedly to see how it appears on the platform. I don’t always include images with my posts, but I’m excited whenever this causes a thumbnail to appear on the feed. I’ll talk about a situation I’m investigating where a blog post contains images but doesn’t show a thumbnail in the preview.

Earlier this year I set up a CDN for hosting the images that accompany my posts. This method was successful in getting thumbnails to appear in the feed. 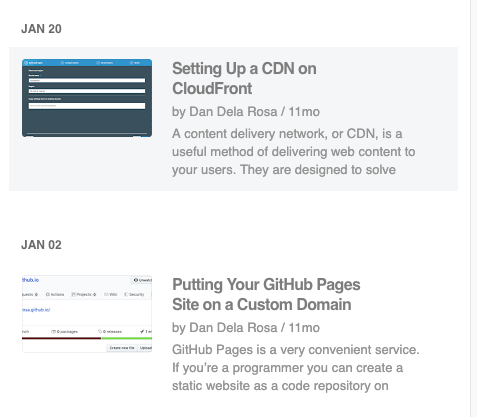 I didn’t use images again until the fall. This time I fiddled around with the process and I hosted images in the same repository as the textual content. I made the change because I wanted to start new blogs, and since these blogs would be self-hosted I would have to solve a new set of problems. If successful I would have a more streamlined workflow for writing blog posts. However, as demonstrated by this blog post in October, the preview didn’t include any images.

In a recent post I went back to hosting images on the CDN and that resulted a thumbnail. It’s good to know I can still use that method in future posts. 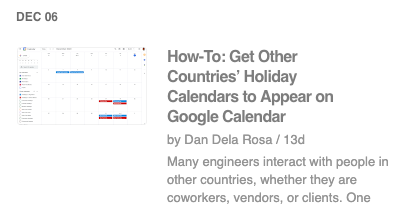 My current theory is that Feedly only picks up images are hosted on a CDN subdomain (e.g. cdn-blog.dandelarosa.net). However, that is only one of the factors that could determine whether an image appears in the preview. I’ll run a more thorough investigation and report when I find more conclusive results.