In this segment I share interesting things I find on the Internet. Some of this stuff is related to engineering, but this segment is not restricted to that topic. It is mostly a break from the usual tutorials and essays, and it’s also an opportunity to reveal more about what I am like as a person. Expect posts like these to appear once a month.

Elsewhere in the blog I try to be as professional as possible, but in this segment anything goes! If this was an early 2000s rap album this is where you would see the “Parental Advisory: Explicit Lyrics” sticker.

After the disaster that was 2020, most of us were hoping this year would be an improvement. However, seeing how 2021 has started, things aren’t looking optimistic. So, I’ll take a page from ESPN and post my Not Top 10 of January.

In no particular order…

A report by ESPN revealed that former Mets general manager Jared Porter made sexual advances on a female reporter while working with the Chicago Cubs in 2016. Porter’s text messages included explicit images and solicitations for sexual favors. What made this incident more despicable was the fact that the he took advantage of the recipient’s misunderstanding of the English language, and that her country treats women poorly when they are caught in sex scandals.

Porter’s behavior was a textbook example of sexual harassment and should not be tolerated in any workplace, not even in an MLB front office. Mets owner Steve Cohen made the right move in firing the GM, for he would otherwise lose the goodwill he gained after purchasing the team this winter.

UPDATE: turned out former manager Mickey Callaway was a sleazeball too.

Elasticsearch switched from an Apache license to SSPL to stop Amazon from stealing their IP, but this decision screwed over the open-source community as a side effect.

OSI Director and fellow BoroJS member Elana Hashman wrote tweets about the change, which appeared in a video Fireship made on the topic.

Thanks to the community feedback (and ya, bad press) Apple decided to remove the ContentFilterExclusionList (in 11.2 beta 2)

Apple released an update to macOS that now requires applications to be monitored by firewalls, according to security researcher Patrick Wardle. Great for Apple to finally make this fix, but also…how was this vulnerability a part of the OS to begin with? 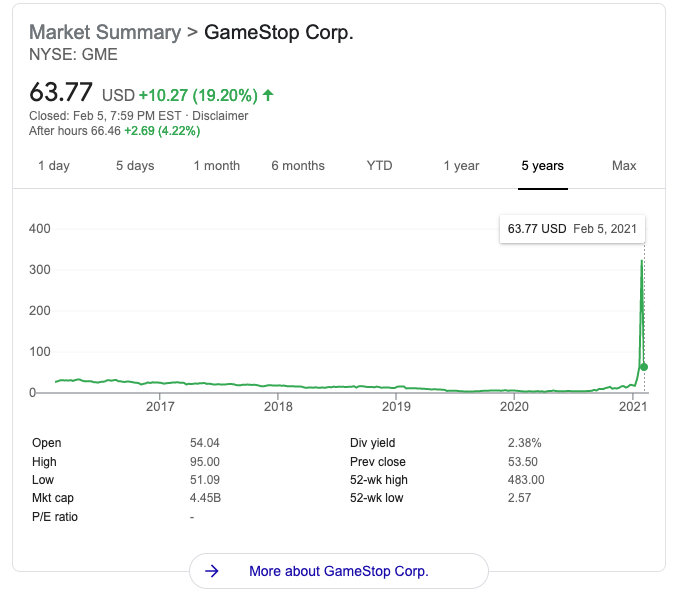 As a value investor I want no part in this firefight.

Also, if you want a good time take a shot whenever someone flubs GameStop’s name and says something like “GameStock” instead.

After New York administered the first doses of the COVID-19 vaccine, they were hoping to tap into the nation’s reserves for a second round. Too bad, because the stash didn’t exist.

In sports parlance you would call this an “own goal.”

I Absolutely REFUSE To Get Into the Sea Shanty Trend

Nope, not watching this one. Sorry, Lawrence.

Oh cool, my favorite singers on YouTube collaborated on a video. Still no.

Wassup, Can a Loc Come Up in Your Crib?

On the flip side, a meme I can’t get enough of is the “Lamar Roasts Franklin” scene from GTA V. Recent videos sub out the characters and take the scene in absolutely bizarre directions.

C’mon All the Fellas Say, SEPHIROTH!

I know this is supposed to be a Not Top Ten list here, but I had to toss a Web Gem into the mix. The Final Fantasy song “One Winged Angel” has been put on the spotlight lately after Final Fantasy VII Remake and Sephiroth’s inclusion in Super Smash Brothers. Inevitably the newest version of the song had to be given the Space Jam treatment.

Enraged by his exclusion from the Space Jam movie Shaquille O’Neil seeks his horrid vengeance just as Disney buys Warner Bros. in its latest corporate acquisition.

Finding himself in a world not just consisting of Bugs Bunny and Michael Jordon (sic), but of a litany of alternate realities, Shaq Kingdom Hearts his way to Final Fantasy 7 by mistake wherein he finds the porta (sic) earrings from Disney’s buyout of Dragon Ball and by wacky happenstance merges with the One Winged Angel.

Thirsty for blood and street cred, Shaqiroth assembles an all star team consisting of Thanos, Majin Buu (Wonder Woman absorbed) and Judge Doom then challenges Jordan and his Looney Tunes pals to the game, no, the fight of their lives.

With boundless materia and Shaq-Fu on his side can the Toon Squad beat Shaqiroth, save their souls from annihilation, keep Aeris from being dipped and still have time to stop Mickey Mouse from bulldozing Acme Acres and making a shitty Tiny Toons reboot?

Last, but not least, a play that would actually appear on an ESPN Not Top 10 list. In fact, this was the inspiration for this list to begin with.

After going undefeated for eleven games, the Pittsburgh Steelers ran into various issues at offense causing them to lose four of the last five games of the 2020 NFL season. While the team clinched the AFC North division title, they were eliminated from the playoffs by losing to the Cleveland Browns, who also beat them the previous week.

All you really need to see is the first play of the game, a bad snap by Steelers center Maurkice Pouncey. Echoing a similar play made in Super Bowl XLVIII, the Browns took an early lead and never looked back.