In this segment I like to share content I run into that’s not related to work. It’s not just a break from the usual engineering fare, it’s also an opportunity to reveal more about who I am as a person. Usually I’ll post things from creators I want to promote but sometimes I’ll share things I’ve made as well.

This segment started in the fall. Here’s what presented in previous entries:

For December’s entry I’ll highlight some discoveries from this month as well as items from earlier in the year that I forgot to mention.

Just before we start I’ll give a general warning: there’s typically bits and pieces here that aren’t safe for work. I think we’re all grownups here but I’ll caution against loading these up in front of kids, especially if you haven’t run them through yourself first.

Jake Mintz and Jordan Shusterman have launched their first podcast since the Cespedes Family Barbecast ended in 2017. (Who’s that handsome fellow being namedropped at the 24 minute mark of Episode 111?)

The Ringer’s Baseball BBQ is a weekly podcast covering the sport, discussing everything fun about baseball as well as the behind-the-scenes workings and social issues surrounding the game. Jake and Jordan’s toilet humor has flushed away over the years, but their passion for baseball has not.

What’s strange about this podcast was how I was made aware of it. I didn’t know the show existed until my employer did an event with another journalist from The Ringer, prompting me to check out what podcasts they had on the network. I follow Jake and Jordan on Twitter, so how the hell did I miss this for so long? Oh, I know, it’s because I’m not active on social media anymore.

In Newcomers, Lauren Lapkus (Orange Is the New Black) and Nicole Byer (Nailed It!) watch the Stars Wars movies for the first time.

This podcast is very, very NSFW. Not the “you’ll hear the occasional cuss word” kind but the “hosts read nasty fanfiction” kind of NSFW. You’ll probably want to put headphones on for this one.

They’re doing a second season covering Lord of the Rings but I haven’t seen those movies so I’m sitting out on that one. However, I could give it a listen if they have something to say about this famous scene:

The Weeknd’s platinum hit “Blinding Lights” probably needs no introduction but it fits the year 2020 like a glove. Lyrics like “Sin City’s cold and empty” describes the state of the world during the worst stages of the pandemic, while the synthwave backing track is representative of both nostalgia for the “before times” and hopes for a better future. 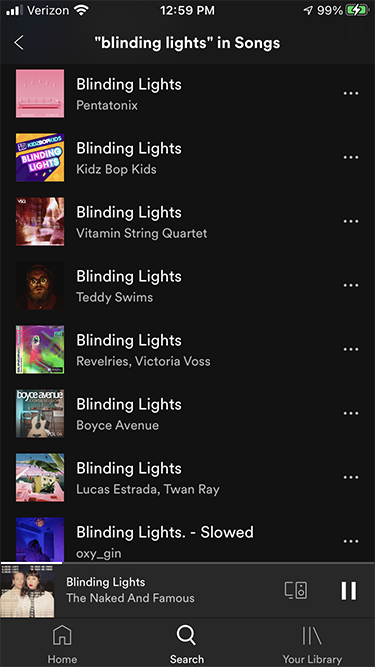 There are also so many covers of this song. A search for “Blinding Lights” on Spotify brings up over a hundred versions of the song from various artists. I’ll highlight the one made by Kaleidoscope Orchestra (who also performed an amazing Linkin Park medley earlier this year). I’m impressed with how they were able to record everyone’s part remotely and stitch it all together into one coherent piece.

I haven’t played video games since 2016, so I have nothing to say about Animal Crossing: New Horizons, Doom Eternal, Fall Guys, or Among Us. However, I’ve found other ways to keep myself embedded in modern gaming culture. Final Fantasy VII Remake is one of the best games that came out this year and I can’t get enough of its soundtrack. FF7R brings back the Airbuster boss fight, complete with its own remix of the classic boss theme. Watch fan composer Alex Moukala break down this song from a musician’s perspective.

For those who prefer to be on the, uh, weirder side of the Internet, Mouth Dreams is a mashup album created by Neil Cicierega. If that name sounds familiar, it’s because this is the same guy who created Hyakugojyuuichi!!!, Potter Puppet Pals, and The Ultimate Showdown of Ultimate Destiny. This album combines songs you’d least expect to be paired to together, while taking other songs in a completely bizarre direction. If nothing else, check out the twelve-minute sequence from “Fredhammer” to “Johnny” in the middle of the album.

Mouth Dreams probably isn’t endorsed by the RIAA, so instead I’ll share this reaction video.

If you want 2020 described in two words, Washington Nationals pitcher Stephen Strasberg has you covered. (NSFW language at 0:31)

Here's the easy to hear audio of Stephen Strasburg yelling "f****ng brutal" from the stands and getting ejected. I love him even more now pic.twitter.com/T1CPXfxHQj

The real MVP though is the reaction from the SNY broadcasters. It’s the banter among the hosts that makes the network win Emmys.

Keith Hernandez: “‘You are brutal.’ That was what I heard.”

Ron Darling: “Is that what you heard? How old are you?”

2020 Was the Reason Why Animal Crossing: New Horizons Needed to Exist

If you want something a bit meatier, here’s YouTuber TheJWittz compiling everything that went wrong at the beginning of the year. This video came out in March so there’s no mention of police brutality, the 2020 election shenanigans, or the “Karen” phenomenon, but the fact that so much went down that quickly shows you how bad this year was.

I hope you all found silver linings this year. Let’s hope the Coronavirus vaccine does its part to end COVID-19 and let’s hope for a more enjoyable 2021.